America – The United States – certainly was and is the greatest nation on earth. The problem is, years and generations of corruption caused much frustration, dissipation, and inner turmoil, if not terrorism, in the form of thuggery enforced and relied upon from head to tail, as the kings of Ba’al and Babylonian-Hollywood players lulled to sleep a generation of children unawares and in dire need of rescue from psychological abuse and physical danger threatened with violence within many little kingdoms set up by Master Mahan, Gadianton robbers and those who are of the order of Nehor, sons of Cain or the Ba’alim, which basically represent the cults of the dead of both Egyptian and Assyrian lore and legend, combining and colluding in hopes of world dominion. All of which would be a valid endeavor and achievable goal and cause if it were of righteous intent and Israel were the third nut on the bolt that unscrews the world and its many nations One in HaShem of Hosts – Creator of Heaven and Earth and all things that in them are or are not, be they beneath or above – in wisdom returned to their right mind and destiny of Dream American; whose destiny is to destroy the pride of kingdoms, be they ancient or present-day realities vying for power, gain, and glory of the world, which Lawfully have no right to exist within the framework of the United States with our Constitutional Right of And Justice For All (Daniel 2:44-45).

Humility and Charity wedded in Holy Matrimony by repentance and good works (Titus 3:8) shall save all that Americans have ever loved, enjoyed and held dear or as sacred to We The People. By the insistence and maintenance of fair play and integrity honest and forthright, which We know the majority may no longer represent but which, in the minority, trusted and duly representing themselves and their compatriots as they ought, but forgot, made rule and right perform that magic which wisdom alone may cause to come to pass for the sake of all, whether good or bad, holy or unholy, righteous or evil, that all may find place and portion fitting and just within Her borders rightly allotted and managed; segregated where necessary, and not where otherwise-minded cares not to be so, yet deserves freedom nonetheless for those pastimes and labors they love best, whether counted loss or gain to them, it matters not to We The People so long as We may restore and rebuild a Commonwealth, Heritage, and Experience American – Red, White, and Blue, true to Her and one another through and through, whether thick or thin, abroad or walled-in.
Everything about America is great, make no mistake about it, but those souls who take themselves too seriously, are greedy for personal gain and glory and unmindful or unaware of other’s needs, rights, and privileges equal or, more precisely, awarded but always shared. Such as scoundrels and knaves who invest only to corrupt and disinherit, or take captive and make merchandise of any and all they may by misrepresentation and application of law and statute man or creature created, made to annoy and deploy or insist and enlist for unworthy and traitorous purposes, must no longer be tolerated, as the churl shall no more be called liberal, much less noble (Yeshayah 32:5). For the time has come that We The People may rightly reconcile Zion (the pure in heart) with Her children and by right, through intention and deed, restore and care for the same; our sacred rights and freedoms which enable us to grow and blossom as the most precious and worthy fruits the world may bring forth and enjoy in due seasons religiously minded and celebrated with honest regard for ancient wisdom’s ways, means, and wonders best enjoyed when Government and State are not permitted to own, mitigate, and mismanage by error of judgment made the more futile by vanity’s hopes dashed and vehicles crashed en route to riches stashed for get-away’s from the hurt and ridicule of the deluded longings of a society dangling over a precipice wherein each member is pushing one another aside in hopes of being the first to go over said cliff’s edge and fall to the amusement of every other member vying to be the next in line at Lemmington’s End. That is the real and true purpose of separation of Church and State, lest We The People forget.

Judaism, many a time, saved Jesus during his first ministry, that he might complete the work appointed him, though he ultimately had to lay down his life to defend it and the Faith of our father’s, that the same might save all peoples, nations, etc., in the own due time of the L-RD. They Whom G-d created in hopes that they might keep His ways and be made like unto Him, made after His own image and likeness, male and female, black and white, bond and free – Torah observant. All will know Him, from the greatest to the least, reborn unto a Living Faith, made free by Divine Liberty. Enjoying a remissions of sins, pardon of guilt, new opportunities and much more meaningful and lasting rewards for all citizens made secure by renewal of Covenant through sacred ceremonial vows and rites of passage and progression performed, remembered and rededicated to several times a year, spreading ritual purity as a cure for cancer throughout a population winning and reaffirming the intrinsic holiness of life lived to and for G-d and one another in brotherhood good from sea to sea shining, as stars in the firmament and out of obscurity unto the perfect day in May? No, Iyar! As I Am and We Are The World. (Proverbs 4:18; Malachi 4:2; Isaiah 29:18; 58:10; Daniel 12:3; Philippians 2:15).

Anything is possible for We who believe and receive, hear and put into practice our Faith, Religion and Sacred Duty to G-d and neighbor (Mattityahu 22:34-46).
Unbelief is worse than disease, crime, and apathy. The most hopeless and helpless case may be miraculously cured, but first, it must be saved and come to believe which is the convincing work of the Holy Spirit, which even Gentiles, who hear not Christ, know and believe in the workings of (3 Nephi 15:23).
And yet, what do we know of this world and of His Kingdom, which is not of this world?
Mortals, even immortals so-called, cannot understand their own way and goings, nor discern their own thoughts, where they come from and to where they may be leading to. All we ever have is the present moment, which, without the Light of Scripture, we are hopeless to understand. This moment, which may be more of an intrusion upon another generation’s time and chance we really don’t deserve to enjoy a part in, if we have not been faithful stewards of the Gift of G-d imparted to us most often during a ‘mid-life crisis’ we rarely survive and come out the victor or overcomer of. It is a lot of labor, mostly in vain, just to grow old with any amount of integrity and dignity intact, that we may at least do no harm nor jeopardize our children’s odds of accomplishing a Work that will or may ultimately work out our own vindication and redemption, recovering from a grievous fall and presumptuous unforgivable sin in sight of men and angels, both seen and unseen, known and unknown to G-d our Father and Creator, the Great Spirit which imparts Life and Light to all things, whether light or darkness preferring – the popularity of the Internet and virtual reality proclaiming so as not to be denied just how many have chosen darkness rather than light, death rather than life, cursing rather than blessing, and lies rather than speaking the truth in love.

Small wonder, for the devil himself, presents himself as though he were an angel of light, that the majority of mankind should choose to do the same. The Grand Delusion has succeeded where all of humanity may only claim a fail. And most carry on because there is no other option or choice available and that in spite of hope, faith, and charity remaining the greatest gifts we’ve ever enjoyed and been entrusted with for the purpose of overcoming and getting the victory at the last with immediate consolation taken to heart for making the right choice, that of teshuva or repentance and good works.
Nevertheless, endurance tells a tale all its’ own for both sides of the coin tossed into the fountain of righteousness (Matthew 17:24-27). That whether in the Right or out of spite in the night, preferring darkness and magic to light and miracle, madness spherical instead of getting from point A to point B right expeditiously unto a Glorious Rest Assured (Yeshayah 11:10).

Whatever else Torah observance may tell us and make known to One and all open to Its’ Wonders infinite, it is that life is supposed to have meaning and holy intention leads to joy unspeakable (simchadik), and not just some so-called happiness in sin for a season enjoyed for the trespass of treason employed by the world and people doomed to destruction and assured no portion of life in this world assured and certainly nothing of eternal life in the world to come.

Mattityahu 5:43-48
“The whole context in the above Scripture is not about outward conformity to rules and standards, however important that may be. Instead, the whole focus on this section deals with loving people, not just those whom anyone could love, but those whom, by the world’s standards, we would not generally love (again, this is about the standards of G-d’s Kingdom, not man’s).
“The important thing to remember here is that G-d does not ask of us anything that He cannot accomplish in us. If left to ourselves, if dominated by our own sinful and selfish hearts, who would love their enemies? That’s not how the world works but are we not now citizens of another kingdom? We have the promise that if we surrender ourselves to G-d then ‘He who has begun a good work in you will complete it until the day of Jesus Christ’ (Phil. 1:6), and what greater work could G-d do in us than to get us, in our own sphere, to love as He loves us?
“How different would your life be, right now, if you were to love your enemies?” ~E.G. White

“There are two ways of spreading light: to be the candle or the mirror that reflects it.” ~Edith Wharton 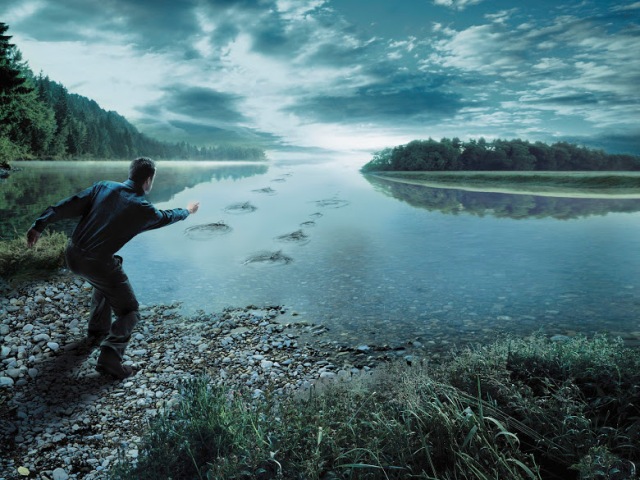 Baskets and Burdens; The Choice of WTP? (We The People)

Follow the Leader is a simple game intended to amuse children. Follow the Master is for those who are of full age and know from Whence he came and Where he is leading, and we too, if we will but follow with the same Faith as the children once delighted in the simple game that led nowhere. That, in the latter end, we might actually get somewhere and enjoy something worth the risk, time, participation, sacrifice, etc., the Haven of Rest and Blessings. Good Times!